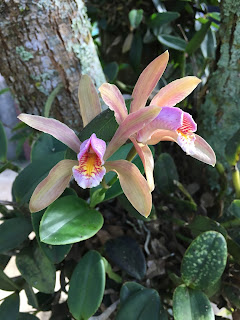 A VISIT TO SERRA DOS PIRINEUS – STATE OF GOIÁS – PART I: THE HABITAT OF TILLANDSIA BARROSOAE (English Version) 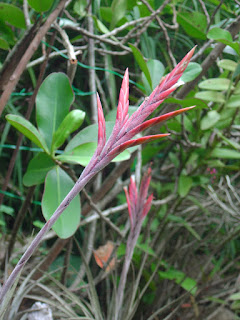 above – Inflorescences of the bromeliad Tillandsia barrosoae, endemic species from Serra dos Pirineus

During his visit to the Herbarim Bradeanum (HB), sited in Rio de Janeiro, Brazil, in August 1997, the botanist Walter Till, from the Institute of Botany of University of Vienna, in Austria, noticed that some of the bromeliads, that had been collected years before (1967), by Dr. Graziela Maciel Barroso and which had been identified by Lyman Smith as Tillandsia lorentziana might be in fact a different especies from the genus Tillandsia. The researcher figured out that those plants were related rather to Tillandsia didisticha than to T. lorentziana. Though Tillandsia didisticha has its natural area of occurrence on the borders of Bolivia to Paraguay and Argentina, those plants had been collected by Dona Grazi (as they called Graziela Maciel Barroso, in the Botanical Garden of RJ) in Serra dos Pirineus, state of Goias.

The plant was published as a new species for science, in 1998 in the BROMÉLIA MAGAZINE of Brazilian Bromeliad Society-SBBR, and was named by Till as Tillandsia barrosoae, in a well deserved tribute to its colector Graziela Maciel Barroso, already considered the most important botanist of South America. A few years later, in 2001, I would visit a portion of the area of occurrance of this plant, near Pirenópolis, in the state of Goiás, but it was a very fast passage. Returning from Mato Grosso state, in march 2018, I sensed that I would find them in flowers, which led me to divert my route a little to the region, hoping to make photographic records and to investigate the phytogeography of Serra dos Pirineus.

I couldn´t find them in flowers, as I thought I would, but of course I didn´t lose the opportunity to examine closely the habitat, taking notes about its state of conservation, together with some other observations on the flora of that mountain range, which is very unique. Tillandsia barrosoae is endemic to Serra dos Pirineus and has a very narrow area of occurrence even within those mountains, related to the Arco da Canastra–Brasília, a disjunction of the very extensive Cadeia do Espinhaço, a chain of quartzite mountains that crosses part of NE and SE Brazil.
Please check bellow some aspects of this visit, in the following pictures:

Following – Serra dos Pirineus is topped  by a lot of quartzite boulders that suggest ancient denudation, related to the erosion of Arco da Canastra–Brasilia, affected by periods of  diaclase, in a landscape very difficult to be interpreted, due to the risk imposed to hikers by deep cracks. But that will help Tillandsia barrosoae to escape from the hands of criminal collectors 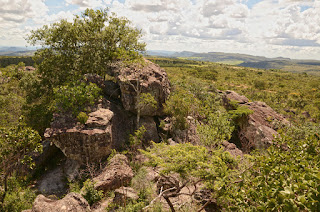 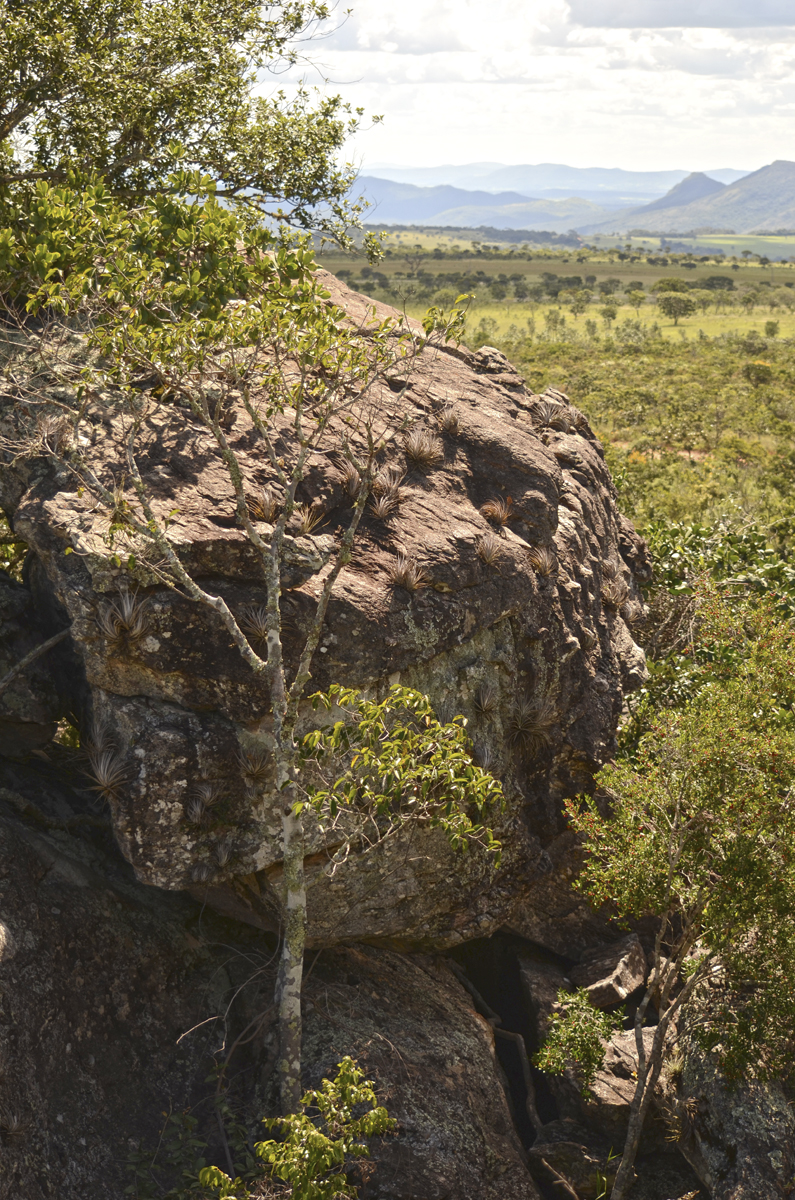 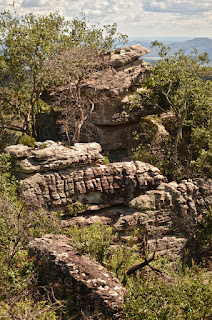 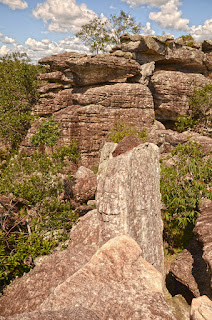 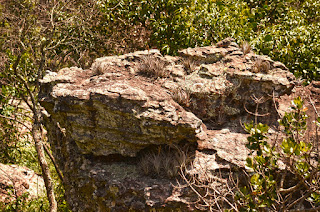 Above – Tillandsia barrosoae is an essentially lithophytic bromeliad. Not a single plant will be found on the branches of the small trees around the boulders, even though you can find lots of Tillandsia streptocarpa growing on those bushes 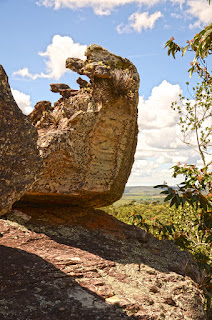 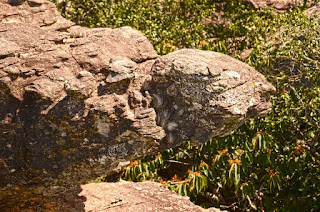 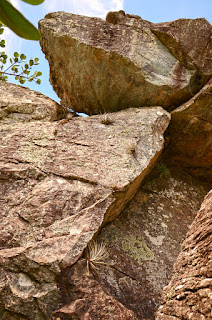 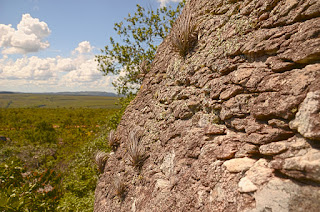 Above – The small and brave lithophytic bromeliad appears to face a promising renovation process and you can find younger plants, side by side to the older ones. Criminal collectors seem to represent the most serious threat to the species, as they work to supply plant lovers all over the world 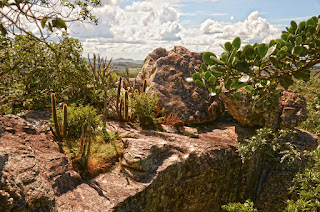 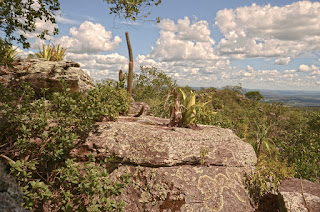 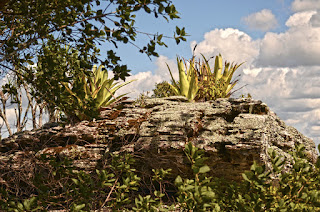 Above – Big specimens of Aechmea bromeliifolia vegetate on rocky decks but also growing on tree branches or trunks, in the middle of the tiny woods 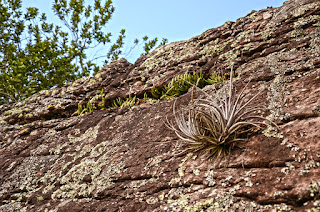 Above – A delicate orchid - Bulbophyllum epiphyticum – also shows around, sometimes growing on branches, but also inhabitting the straight rocky surface or crevices, side by side with Tillandsia barrosoae 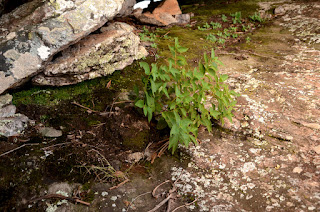 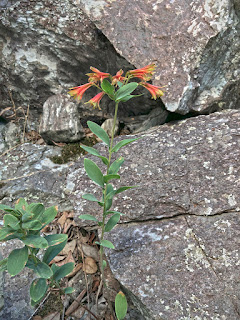 Following – The cladodes of the Pilosocereus vilaboense cactus are a spectacle apart, in the landscape among the rocks of the Pirineus, showing sculptural forms or forming elegant sets 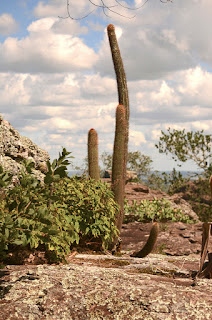 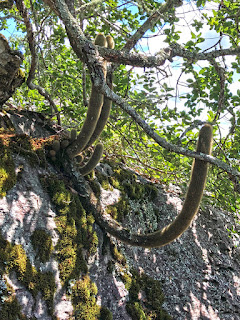 Below – Micro-landscapes, formed by trunks and branches tangled together, confuse our eyes, among the boulders, in Serra dos Pirineus. It´s difficult to discern what is rock from what is wood 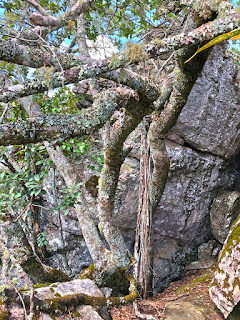 Below – Lithosols are all that can be found, around the large amount of boulders in the area, being quartzite the most remarkable element. The vegetation is there classified as cerrado rupestre de altitude (high altitude rocky savannah), sometimes opening space to grasslands spotted on rock base, or to a kind of rocky field, where the intergrades are hard to discern. All of that belongs to the famous CERRADO complex. 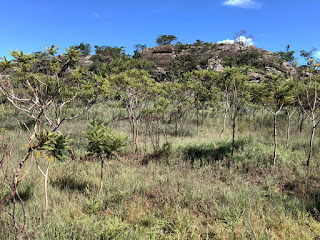 Above – At the borders of the rocky outcrops, you can find small trees of Mimosa regina (Family: Fabaceae). They will gather in homogenous populations, all over the open grasslands 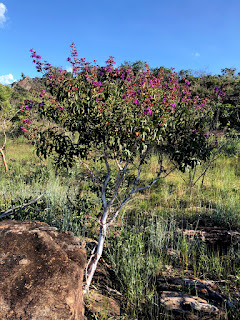 Above – The elegant tree, from the Melastomataceae family (Tibouchina papyrus), is known as the papyrus-tree. They say it represents the plant-symbol of the city of Pirenópolis 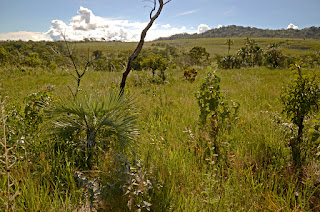 Above – View of a rock based grassland (a moisty grassland), in which can be seen a small stemless palm-tree (Butia archeri), amidst the bushes 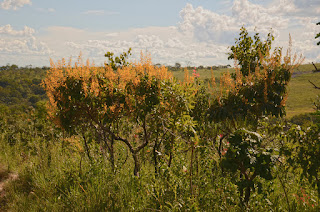 Above – The beautiful Vochysia rufa, belonging to the Vochysiaceae Family, showing it´s gorgeous yellow flowers, in the middle of the vast cerrado open landscape 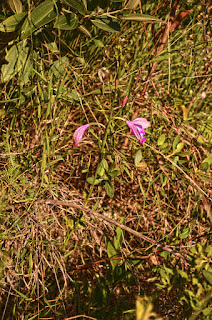 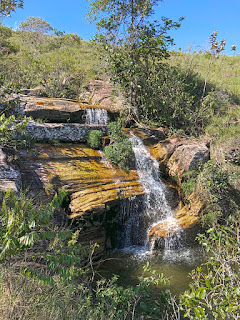 Above – One of the several waterfalls that can be found, in the region of Serra dos Pirineus 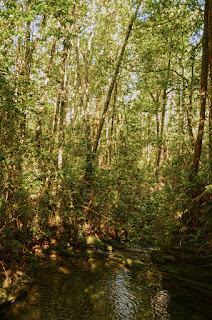 Above – View taken inside the evergreen forest (mata ciliar), with a nice and cristal-clear pond, in Serra dos Pirineus 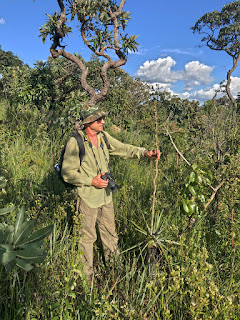 Above – The author Orlando Graeff examining a specimen of the bromeliad Dyckia cf. weddelliana, in the middle of the rocky savannah, in Pirenópolis 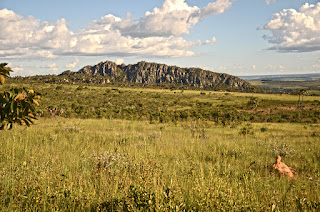 Thanks to Paulo Padilha, who safely guided me through all the Pirineus ecosystems